Royal Botanical Garden is situated about 5.5 kms west of Kandy city of Sri Lanka and attracts 2 million visitors annually. It is situated next to Mahaveli River, which is the longest river in Sri Lanka and world famous for its collection of orchids. It includes more than 4000 species of plants, including of orchids, spices, medicinal plants and palm trees. The total area of the botanical garden is 147 acres (0.59 km2), at 460 meters above sea level. 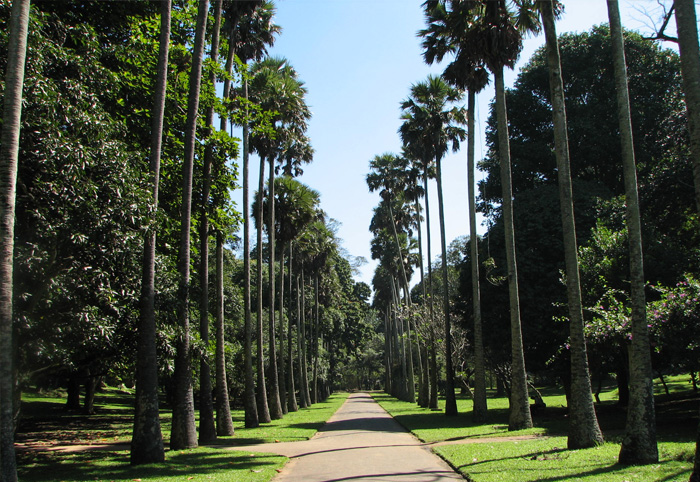 The origins of the Botanic Gardens date as far back as 1371 when King Wickramabahu III ascended the throne and kept court at Peradeniya near Mahaweli River. This was followed by King Kirti Sri and King Rajadhi Rajasinghe. A temple was built on this location by King Wimala Dharma, but it was destroyed by the British when they were given control over the Kingdom of Kandy. Thereafter, the groundwork for a botanical garden was formed by Alexandar Moon in 1821. He used the garden for the plantation of coffee and cinnamon. The Botanical Garden at Peradeniya was formally established in 1843 with plants brought from Kew Garden, Slave Island, Colombo, and the Kalutara Garden in Kalutara. The Royal Botanic Garden, Peradeniya was made more independent and expanded under George Gardner as superintendent in 1844. On his death in 1849 George Henry Kendrick Thwaites became superintendent. He served until 1879, when he was succeeded by Henry Trimen, who served until 1895. The Garden came under the administration of the Department of Agriculture when it was established in 1912.

There are a number of avenues in the river drive such as Cook's Pine Avenue, Palmyra Palm Avenue, Double Coconut Avenue, Cabbage Avenue and Royal Palm Avenue. The classical Avenue of Palms is located in this Garden. One tree with a significant history is the Cannonball Tree planted by King George V of the United Kingdom and Queen Mary in 1901. The tree is often laden with fruit, which are thought to resemble cannonballs.

During the Second World War, the Botanical Garden was used by Lord Louis Mountbatten, the supreme commander of the allied forces in the South Asia, as the headquarters of the South East Asia Command.